Some businesses require a control over printers usage in a way that doesn’t allow all users to print to all printers. User allowed printers feature fulfills this requirement, by using the same setup as for the User favorite printers, but in a restrictive mode where Administrator performs the configuration and users don’t have the possibility to modify it. 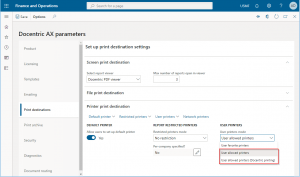 The difference between these two settings is as follows:

User allowed printers (Docentric printing) is applied only when the Docentric printer print destination is used. This has the following consequences:

User allowed printers is applied to both Docentric printer and SSRS printer print destination in the following way:

Setup form and actions are exactly the same as when setting up User favorite printers by printer.

Setup form and actions are exactly the same as when setting up User favorite printers by user.