If company uses dedicated printers for certain reports, for example checks, labels, or invoices, then it is useful to prevent users from accidentally printing other reports to these dedicated printers. The Restricted report printers feature allows you to specify which combination of printers and reports in D365FO isn’t allowed. You can do it from the printer perspective or from the report perspective.

Set up restriction by printer

To set up the reports restricted for a given printer, go to Docentric AX parameters > Print destinations > Printer print destination > Restricted printers > Set up by printer: 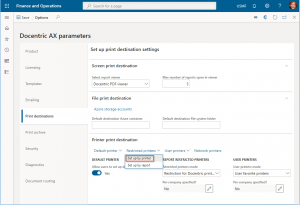 Based on the setup from the above image, only the Cheque_US report may be printed on the Check printer. Notice the following tokens at the top of Restricted reports list:

When used in this way, these two tokens guarantee that only check report can be printed on the check printer.

As a result of the above setup, the Check printer won’t be offered in the Docentric printer print destination for any report except Cheque_US: 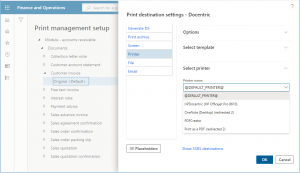 This prevents the accidental printing of non-check reports to the dedicated check printer. But if you also want to achieve that the check report can be printed only to the check printer, then you need to make sure that Check_US report is in the Restricted reports list of every other printer. You can select one by one each printer in the Restricted printers by printer form and move the Check_US report to the Restricted reports list, but there is a simpler way to achieve the same result, by clicking the Restrict for other printers button. The selected report will be automatically restricted for all other reports and it will be presented by a lock icon by that report:

Another way to simply achieve the full bidirectional restriction is by setting the restriction by report.

Set up restriction by report 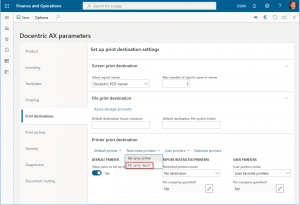 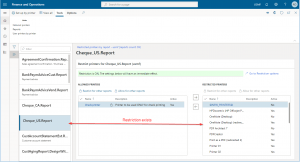 Based on the setup from the above image, Cheque_US report may be printed only on the Check printer. Notice the following token at the top of Restricted printers list:

As a result of the above setup, in the Docentric printer print destination for Cheque_US report only the Check printer will be offered in the printers lookup.

It isn’t enough to set up the restricted printer-report combinations, but you also need to activate the configured restrictions. Go to Docentric AX parameters > Print destinations > Printer print destination and use the below marked settings: 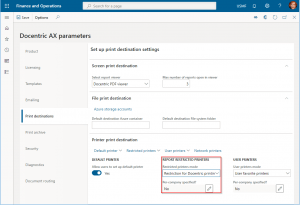 You might have noticed a green stripe at the top of Set up by printer and Set up by report forms. They are there to provide a clear information if the restriction is currently active or inactive. The related help text reminds you where the activation/deactivation is made and a Go to Restriction options button will take you directly to the mentioned form:

And here is what you can expect when the restriction is inactive:

How to Set Up and Use Default Printer >>
User Allowed Printers >>