How to Upgrade Docentric AX Models

You can also use model files to upgrade the product to a newer version. The procedure is exactly the same as installing the product via models, except you will perform replacing instead of importing two Docentric AX models: Docentric AX and Docentric AX Extension, by using the ModelUtil.exe tool.

Note that these two models contain complete Docentric AX solution and there are no external dependencies or services to reinstall or upgrade.

If you experience any issue during replacing the models, stop IIS server or at least the AOSService application and try to replace them again. 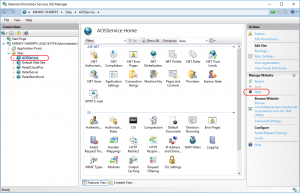 After that, retry to replace both models, Docentric AX and Docentric AX Extension, by using the ModelUtil.exe tool as described below.

Please note that from Docentric AX version 3.1.0 we introduces an additional model, Docentric AX Emails, supported for Platform 10 and up, which improves the built-in Email Templates functionality, usually used for Retail orders or workflow email notifications.

Run Command Prompt as Administrator and navigate to the Bin directory of your Packages folder
(typically, C:\Packages\Bin or C:\AosService\PackagesLocalDirectory\Bin).

Execute the ModelUtil.exe command for replacement of the two Docentric AX models:

After the Docentric AX and Docentric AX Extension models are reimported, build the models, synchronize the database and start IIS server (or AOSService web app).

If you have Visual Studio open while replacing the models, you need to refresh them before you start the build: 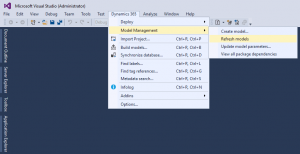 Database synchronization is needed only when the data model in Docentric AX is changed, which rarely happens. This info is provided in the VersionReleaseNotes.txt file within the downloaded ZIP package (DocentricAX_ver.zip) containing the new product version release.