Azure DevOps is a new name for TFS Online. In this manual we use the term TFS.

After you import these models using the script or the ModelUtil command line tool (see How to Install Docentric AX via Models) and then open Windows Explorer, you will notice in <ServiceNode>:\AOSService\PackagesLocalDirectory three new folders. These folders represent so called AX packages and in case of the Docentric AX product each of them contains exactly one model: 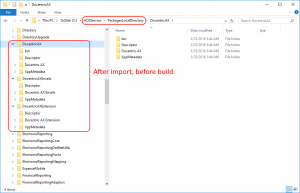 All artifacts from the marked folders on the image below should be added to TFS version control. 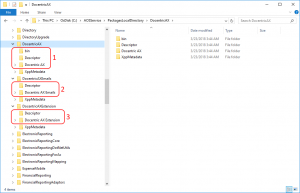 In each of the Descriptor folders you will find the single model descriptor file, whereas DocentricAX\Docentric AX, DocentricAXExtension\Docentric AX Extension, DocentricAXEmails\Docentric AX Emails contain all model’s source files. They are XML files and contain definitions of Docentric classes, forms, tables, etc. as well as extensions of the built-in D365FO artifacts. These artifacts should all be added to TFS version control. 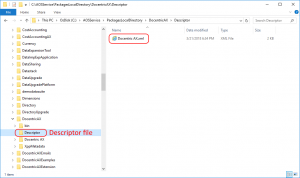 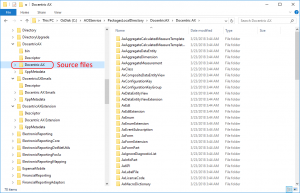 The Docentric AX model from version 3.3.9 contains only one additional DLL. For previous versions (3.3.8 or below), it contains three DLLs. They will appear in the DocentricAX\bin folder and should be added to TFS.

Clean installation: Add DLLs to TFS for 3.3.9 or above

For version 3.3.9 or above, all Docentric DLL files are merged into single one named Docentric.AX.dll. This DLL should be added to TFS. 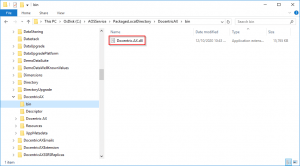 From the Docentric AX\bin folder, add to TFS only Docentric.AX.dll. All other files, which will be created in this folder after the first build, including Dynamics.AX.DocentricAX.dll, are the build artifacts and should not be added to TFS.

Clean installation: Add DLLs to TFS for 3.3.8 or below

For version 3.3.8 or below, the Docentric AX model contains three DLLs that should be added to TFS: 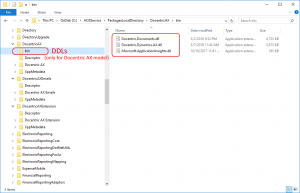 After you replace Docentric AX models, the model folders and descriptor files will be automatically updated. New files will be added and old ones removed, except Docentric DLL files in the bin folder of the DocentricAX package, where the old files remain.

When you check-in the upgraded version to TFS, there should be exactly the same files in repository as if you would install and check-in the new version on a clean environment. TFS does not automatically detect and include all upgrade changes for check-in. It requires some manual steps that can be error prone.

If you would like to check-in all the changes of the upgraded Docentric models, make sure all these changes are listed in Team Explorer\Included Changes, before checking-in them to TFS. Updates are included automatically, while deleted files have to be manually promoted from Team Explorer\Excluded Changes > Detected. New files have to be added manually as well (Add Items to Folder). Obsolete Docentric DLLs in DocentricAX\bin folder have to be manually deleted.

It is of key importance that you DO NOT synchronize the database before the new models are installed and built, and that application is stopped during the upgrade procedure (IIS and the Batch service). Violation of this rule might result in loss of your data!

After the build, all bin folders will be filled with Microsoft’s DLLs and other files, so bear in mind that only Docentric DLL(s) from the screenshots below (and specified in the above chapters) should be put under TFS version control.

If you put any other files from the bin folder of the DocentricAX package under TFS, you will see the changed objects in Pending changes after each build. 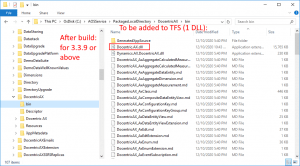 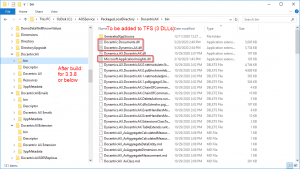